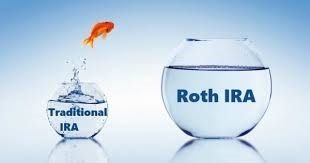 You can convert your IRA to a Roth … but should you?

In 2010, Congress began letting everyone convert their Deductible and Non-Deductible IRAs to a Roth IRA. (Previously, conversions were limited to those with Adjusted Gross Incomes of less than $100,000.) Converting is alluring. If you don’t convert, you’ll pay taxes when you make withdrawals in retirement. And you must start making those withdrawals in your early 70s. But withdrawals from Roth IRAs are tax-free, and there’s no requirement to begin withdrawing money at any age.

Those facts suggest that converting to a Roth is a no-brainer. But before you act, read the fine print: The money you convert is fully taxable (which explains why future withdrawals are tax-free; instead of paying the taxes later, you pay up front).

So the choice is yours: Pay the tax now on the current balance so that future withdrawals are tax-free, or pay the tax later when you make withdrawals from the (theoretically higher) balance. So should you pay now or pay later? It’s a simple question, but as with so many issues in the field of personal finance, the answer requires substantial analysis. Getting it wrong could cost you tens of thousands of dollars in unnecessary and premature taxes, and many tens of thousands more in lost wealth.

While I agree with those who say that the Roth Conversion conundrum is a timely issue that investors should address, I do not believe that conversion is necessarily in everyone’s best interests. Let’s examine the 17 notions involved with converting your IRA to the Roth.

It Makes Sense If Your Current Tax Bracket Is Low
Some people are temporarily in a low tax bracket. This can be caused by a variety of reasons: divorce, job loss, temporary work assignment (such as in a tax-free hazardous zone), high and sudden (but short-term) medical expenses, and more. If you are currently in the 12% federal income tax bracket or less and have reason to believe that your income will be higher in retirement, placing you in a higher bracket, converting now makes sense.

It Could Increase Your Children’s Inheritance
By converting your IRA to the Roth, you pay the taxes now. If you want your children or grandchildren to inherit the account when you die, they’ll receive the money without having to pay income tax. With proper estate planning, their inheritance can be increased substantially compared to a traditional IRA. Of course, this Roth Conversion feature is of primary value to your heirs, not you.

It Could Increase Your Federal Income Taxes
If you’re in a low tax bracket, be aware that converting could push you into a higher bracket — and possibly even the highest bracket. That’s because the amount you convert is added to your taxable income. So if you earn $20,000 and you convert a $200,000 IRA to the Roth, your income is now $220,000 — putting you in to a higher income tax bracket. This would affect your overall taxable income, not just the dollars involved in the conversion.

It Could Increase Your State Income Taxes
If you live in a state with an income tax and you convert, you’ll owe state taxes. If you later move to a state that has no income tax and convert then, you’ll avoid that state income tax.

It Could Cause You to Pay a 10% IRS Penalty
Say you convert a $100,000 IRA to the Roth, causing you to owe $35,000 in federal income taxes. Are you able to pay the tax from earned income or money held in other accounts? If you use money held in the IRA, and if you’re under age 59½, you’ll owe a 10% IRS penalty in addition to the tax itself. That’s an additional $3,500. (And we haven’t mentioned state taxes — paying those from the IRA could further increase your taxes and IRS penalties.)

It Could Require You to File Estimated Payments
The IRS expects you to pay your taxes within a certain time frame in which you earn the money.

Ordinarily, this is handled for you by your employer (through payroll deductions). But if you convert a large IRA, you could be required to file IRS Form 1040-ES, making payments roughly each quarter. If you don’t, you could incur interest and penalties.

But this calculation is based on the year-end value of your IRAs — including the money you converted — not their value on the day you converted. So if your account increases in value by year-end (or if you rollover a pre-tax 401(k) into an IRA) you might pay more in taxes than you expect.

Don’t be so sure that your tax rate in retirement will be higher than it currently is. If you are retiring in 20 years, current tax law could be outdated. Thus, all assumptions about future tax legislation are sheer speculation — hardly justification for making a sound financial decision.

It Could Increase Your Medicare Premium
If you are covered by Medicare, your Part B premium is based on your income. Converting increases that income (if only for a year or two), which could add hundreds of dollars to your monthly Medicare costs.

It Could Cause You to Pay More in Taxes Than You Should
Some investors do everything they can to reduce their income taxes. They save all their money in IRAs, employer retirement accounts, tax-free municipal bonds — and the Roth IRA. By converting their IRAs and employer accounts to the Roth, they are able to generate income in retirement that is 100% tax-free.

But avoiding taxes so completely isn’t necessarily a good result. That’s because the tax code offers a variety of tax deductions, such as the standard deduction, plus deductions for mortgage interest, real estate taxes, charitable contributions, being older than 65 years of age, and other reasons. If all your income is tax-free, these deductions offer you no value. In other words, you might not want to convert and pay income taxes today when some of this taxable income can be offset by tax deductions in retirement. You might actually be better off financially by having some taxable income rather than 100% tax-free income.

It Could Cause Your Taxes to Rise Even Further
In the year you convert, your income rises. That creates the risk that you might lose some or all of your personal exemptions and itemized deductions — and some (or more) of your Social Security benefits may become taxable as well. All this could cause your tax bracket in the year of conversion to be even higher than you anticipate.

Converting at the Wrong Time Could Cause You to Pay More Taxes Than Necessary
A lot of people who converted their IRAs in early 2008 later may have regretted it. Because of the economy, many people discovered that their account values were lower at the end of the year. But if you converted in January 2008, you had to pay taxes based on the value of the account at that time — even though the account might have been worth 40% less 12 months later.

To help protect you against the risk that the account might drop in value shortly after you convert, the old tax law allows use to allow you to “recharacterize” your account. In other words, you get to “unconvert” your IRA from the Roth back to the Deductible or Non-Deductible IRA you originally held. However, current tax law eliminated your ability to do Roth recharacterizations. Now, if you do a Roth conversion and your account falls in value, you cannot “uncovert” leaving you stuck with your decision.

Take extra care if you are only partially converting your variable annuity. When you convert an entire annuity, the annuity itself remains intact. But when you convert only part of an annuity, you are essentially splitting off part of your annuity to create a new IRA. This sounds simple enough, but breaking off a piece of the annuity could be the same as making a withdrawal. Depending on your annuity, a premature withdrawal could trigger the annuity to lock in a living benefit payout percentage earlier — and therefore much lower — than you had expected or planned. It could also cause the annuity to stop providing guaranteed growth or income.

The Money You Convert Becomes Untouchable for Five Years
When you make a direct contribution to a Roth IRA, you can withdraw that money at any time without penalty. The earnings, however, must stay in the account until you are 59½ — or you’ll incur ordinary income tax rates plus a 10% penalty.

The rules for Roth IRA conversions are different. If you convert money to a Roth IRA and are under age 59½, you can’t withdraw the rollover contributions for five years. If you do, you’ll face a 10% penalty. (The rules for distributions of earnings are the same as with direct contributions.) There are exceptions for medical expenses, medical insurance premiums paid during unemployment, first-time homebuyers, death, disability, and higher education. And each conversion has its own five-year holding period.

It Could Impact Financial Aid for Your College Student
IRAs aren’t included among your assets when a college calculates a financial aid package. However, when you convert to a Roth IRA, the money shows up on your tax forms as income for that year. If your income is artificially inflated when you fill out financial aid forms, you’ll have to explain the situation to the school, and they may or may not take that information into consideration.